The clam Shrimp (Conchostraca) are, just as Triops and Fairy Shrimp, also Tadpole Shrimp. They exist since the Silurian period (416 million years ago) and are morphologically still almost unchanged. With a Clam Shrimp you basically bring a part of the dinosaur into your aquarium. Shrimp owe their name to their appearance. Unlike Triops which have a shell on the back, Clam Shrimp have shells on the left and right side of their body. This gives them the appearance of a clam. The two shell-halves protect them from injury. Clam Shrimp reach a size of 0.5 to 2 centimeters. Just like Triops in the first days or Fairy Shrimp over their whole lives, Clam Shrimp also filter their food from the water. Spirulina algae powder is well suited for small Tadpole Shrimp. The cysts of Clam Shrimp are, similar to other Tadpole Shrimp species, very resistant and still able to hatch even after many years. Clam Shrimp are, despite their small size, very agile and fast. They move rapidly through the aquarium by using jerking movements. Nevertheless, Clam Shrimp are not great swimmers. They swim especially during the first 1 - 2 weeks of their lives, after which they increasingly turn to the bottom of the aquarium and stay there most of the time. They often bury themselves into the sand and stay there for some time. Taking a look at the cysts of Clam Shrimp under a microscope, one can see that those look like a flying saucer. 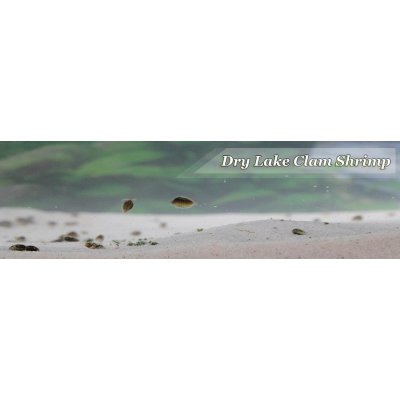